Other Names for Coconut

In India (and in other countries abounding in coconut), almost every part of the coconut and the coconut tree are used lovingly; the fruit, the nut, the shell, and the leaves all serve their purpose. It comes as no surprise that the word for coconut in Sanskrit is kalpavriksha, which means ‘the tree providing the necessities of life. In terms of its documented history, it dates back as far as 3000 BC and is mentioned in the ancient post-Vedic text called the Mahabharata. Be on this to know more about the uses of Coconut.

There are many uses for Coconut. Coconut is a multipurpose fruit with high economic value. Every part of coconut has different uses, including fruits, wood, and leaves. Though mango is the king of fruits in India, coconut is celebrated as a symbol of prosperity, a blessing of nature, an auspicious object of ceremony, a useful item of handicraft, and an essential ingredient for cooking. The origin of this plant is debated. The mentions of coconut are found in the “One Thousand and One Nights” story of Sindbad the Sailor. He is said to have sold it during his voyage. Marco Polo called this tropical fruit Nux Indica in 1280. The names used by the Arabs to refer to it mean “Indian nut”. The crew of Vasco da Gama’s ship named it Coco after a ghost in some Portuguese folklore as the rough surface of coconut reminded them of the ghost.

Coconut has a special place in the Hindu culture of India. It is believed to be an auspicious fruit and used in many rituals on pious occasions. Coconut is offered to deities in Hindu temples across the globe. Many holy events and celebrations are inaugurated with the breaking of coconuts. Both flesh and water of coconut are among the essentials for worshipping ceremonies. Earthen or copper or brass pots with green coconuts and mango leaves are put on both sides of the main entrance of temples, households, and workplaces on festive days. It is a symbol of prosperity and is believed to welcome Lakshmi, the goddess of wealth for Hindus.

In Goa, the groom and bride, in their respective homes, participate in a ceremony called a rose, where they are both blessed by well-wishers who, one by one, apply coconut milk to their skin. The idea was that the coconut milk would cleanse the skin of the bride and groom so that they would have a beautiful and clear complexion for their wedding day. Nowadays, the rose has become an event for relatives and friends to douse the bride or groom with coconut milk and have a blast whilst doing so. 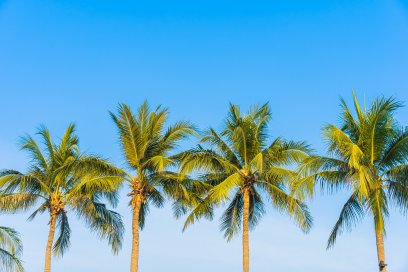 Coconut oil is quite popular nowadays due to its unique and attractive flavor. Coconut oil is not just for cooking, though. It is good for hair, and the body. The use of coconut oil in hair can make dry hair soft and silky. The Lauric acid in coconut oil is believed to be excellent for health, however, because it boosts immunity and can protect against several illnesses.

In the coastal regions of India, fishermen offer coconut to the seas, expecting to catch fish in abundance. Devotees break as many as 108 coconuts at a time, at some temples of Lord Ganesh and Lord Hanuman. Coconut plays an important role in Buddhist weddings. Coconut flowers are present along with other things during marriage ceremonies.
Goa has seen the evolution of coconut craft in India. Gifted artists create beautiful objects out of coconut shells in both intricate and crude forms for interior décor. Handcrafted artworks from coconut shells are imperishable and exude raw elegance. Dry shells are carved in different designs and shapes to make utility and decorative items such as pen holders, wall hangings, bowls, spoons, ice cream cups, flower vases, etc.

After Indonesia and the Philippines, India is the largest coconut-producing country. In India, around 90% of coconut are coming from five main states Kerala, Andhra Pradesh, Tamil Nadu, Goa, and Karnataka.

WhatsApp Chat is free, download and try it now here!